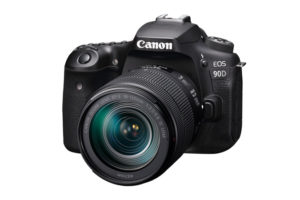 Canon has updated the very popular EOS 80D with the newly announced Canon EOS 90D. There are a few major changes to the camera that will be very welcome. Of course the first change most will notice is the increase in resolution from 24MP to 33MP. While this is not a huge increase, any increase is welcome by most photographers. This makes the Canon EOS 90D the highest resolution APS-C camera as of the announcement date.

Another boost comes in the form of the increase in the frame rate. At 11 frames per second the Canon EOS 90D is in the EOS 7D territory. It will be interesting to see if Canon updates the 7D Mark II in the near future or if the 90D will quietly take over that market. With full frame becoming more affordable, I would not be surprised to see the 7D reach it’s end of life.

In yet another sign that the 7D Mark II’s days might be numbered, the Canon EOS 90D receives a joystick that can be used in addition to the standard 4-way controller. The joystick is typically used to set the AF point in the viewfinder, but can also be used when navigating menus and options.

One interesting spec that has not received a lot of attention is the 1/16000 second max shutter speed in electronic shutter mode. I can’t think of too many situations where that will be practical, but it shows some innovation on Canon’s part.

The Canon EOS 90D is the first Canon APS-C body to feature 4k video capture without a crop, but there is a catch – the frame rate is 30fps rather than 60fps. For those looking to capture 4k video they will be likely be tempted by offerings from other manufacturers. With Canon’s history and knowledge in the Video market, I don’t know why they seem to be lagging on their DSLR bodies when it comes to video specs.

Another feature I really like about the 90D is the fully articulating LCD screen that was found on the 60D and 70D as well as many other recent EOS bodies. While I don’t use this for composing images very often, I really appreciate the ability to “close” the LCD to protect the screen when the camera is packed away. Most other manufacturers only offer a tilting LCD on their bodies.

I wish that Canon would have added a second SD slot. This is not a deal breaker, especially since Nikon dropped the second SD slot in the 7500. However, it is nice to have the options a second slot provides. Another missing feature is a dedicated White Balance control. I am guessing that you will be able to customize one of the buttons (such as the “set” button) to be a shortcut to the white balance controls like on my 6D Mark II and other Canon bodies. This is a feature found on the Rebel series of cameras below the 90D and on the 7D and 5D series of cameras above the 90D

Overall the Canon EOS 90D looks to be a real winner. It will be interesting to see if the 7D series truly has been replaced by this new model. With 11 frames per second shooting, the addition of the 8-way joystick controller the Canon EOS 90D has definitely stepped up to the next level. If the EOS 90D is not replacing the 7D Mark II, it will certainly be a viable alternative to the aging classic. I will be doing comparisons between the 90D and the 7D mark II as well as the Nikon D7500 and the Nikon D500 to see how it compares in the near future.