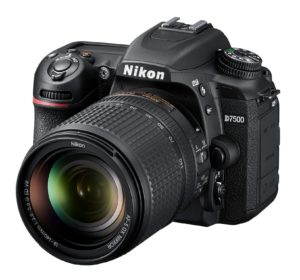 Nikon announced the new D7500, which is slated to start shipping “Summer 2017” and will be a replacement to the Nikon D7200. The Nikon D7500 competes in a popular market segment with the Canon EOS80D and the Sony A6300/A6500 bodies (as well as others) offering a more advanced camera with better build quality, performance and features for around $1200-$1500 USD.

The Nikon D7500 will mostly be seen as an incremental update of the very popular D7200, but is a step up from the D7200 in terms of metering, buffer, build and now features a tilt LCD touch screen.

key differences between the New D7500 and the Nikon D7200

For some users, the lower megapixel count will be seen as a disadvantage since “more is better”. However, the image quality from the D500 is an improvement over the 24mp D7200 sensor, especially in low light and in real world photography the 4MP difference is not all that significant, even in prints over 13×19 inches.

Another change that will be seen as a downgrade is the lack of the index tab for older lenses. This tab is what communicates to the camera the aperture setting on the lens since older lenses are not controlled electronically. You can still use these lenses, but you will have to either use a spot meter or guess, shoot and review.

One more thing that has been observed is there does not appear to be a battery grip option for the new Nikon D7500. One was not announced with the camera, and there is not a connection on the bottom for the current grip. Now it is possible that Nikon may be working on a battery grip option that uses a stalk that goes into the camera body similar to Canon. I prefer this design as it allows me access to both batteries without having to remove the battery grip. We will have to wait and see if that is the case.

Click to view full size – images will open in a new browser tab or window. Aside from the badge change and slight IR port shape, the only other major change to the front of the new D7500 is the AI Index tab is missing. This will be seen by many as a disadvantage since you will not be able to use older lenses with full metering. Also, the stereo mic inputs have been moved to the front of the camera from the top of the flash housing. The biggest difference on the rear of the D7500 is the new tilting touch screen LCD. Additionally, the “Info” button has moved to the left bottom row of buttons and the “i” button has moved above the “still/video/live view” control (the “info” button was below on the D7200). This is a minor rearrangement of the controls on the rear of the camera but if you are used to the “i” and “info” button placement on the D7200 this will be an adjustment. Also, the ISO button is now the Metering button (metering used to be on the top of the camera near the LCD). Of course the biggest change here is the switch to a single card slot instead of dual slots. Additionally the D7500 only supports up to UHS-1. Since Nikon decided to drop a card slot, it seems to me they should have made the single card slot UHS-2 compatible instead. Everything here is in pretty much the same place as before, however, the Mic, USB and HDMI ports are all now under the same door whereas on the D7200 the Mic and USB ports were under their own door and the HDMI was a separate door. Nikon also added 5 small bumps to the AF button to help with the tactile feel. This will make identifying the button easier when not looking directly at the button. You can also see the “Bluetooth” logo indicating compatibility for SnapBridge. Overall the Nikon D7500 will be seen as an update to the very popular D7200. There are some controversial decisions that have been made by Nikon such as the single card slot, lack of battery grip option and perhaps even the lower megapixel count. However, the Nikon D7500 shoots at a faster 8fps and has an even larger buffer accommodating up to 50 RAW 14-bit images. It also features a new tilting touch screen LCD and “enhanced” weather sealing. Nikon has to be careful here to avoid cannibalizing D500 sales. The D500 needs to be seen as a worthwhile upgrade over the D7500 since it commands a $700 premium over the D7500.

It will be interesting to see how the camera performs when it starts shipping in the Summer.

based on 612 user reviews online.