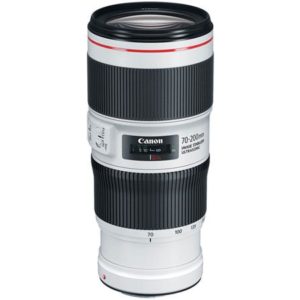 The new Canon EF 70-200mm f/4L IS USM II is a bit different than it’s predecessor with the biggest physical difference being the new lens takes a 72mm filter thread. This was somewhat disappointing to me as not too many lenses use this filter size. The newer lens is also slightly larger, although not really noticeably so, even when holding both lenses at the same time. The newer lens has a closer focus of only 39.36 inches. Another major improvement is the image stabilization. Canon claims the new lens delivers up to 5 stops of correction. The newer version is also quieter than it’s predecessor.

This lens is great for photographers who like to hike and travel but don’t want to carry the larger and heavier f/2.8 version. Image stabilization helps when hand holding the lens when compared to the non-is version of the lens. However, you may also want to consider the EF 70-300mm f/4-5.6L IS USM lens for it’s greater reach although it does sacrifice a stop (f/5.6 vs f/4) when zoomed all the way in. For sports and low-light situations, the f/4 max aperture will force you to use 1 stop higher ISO when compared to the f/2.8 version. With most modern cameras that is not a big deal and the smaller size and weight are a welcome benefit.

I have not had a chance to use it yet, but from what I have seen it looks to be a real winner! The previous IS version of the lens was very highly regarded and the new version is said to offer even better image quality. I was a little disappointed to see the larger filter size. 72mm filters are primarily found on Canon’s L-series prime lenses, but most of the zoom lenses use 67mm and 77mm filters. If you don’t already own 72mm filters then this is a cost you will need to factor in when purchasing the lens. Of course the original non-is version of the lens is one of the best bargains in the Canon L-series lineup and if you are willing to carry and use a tripod (or a monopod at the very least) it also offers excellent image quality in a slightly smaller and lighter package but at around half the price. I do wish that Canon would include the tripod mount with this lens rather than offering it as an optional accessory.

Size and weight (when compared to the f/2.8 version)

Price (when compared to the f/2.8 version)

Size and weight (when compared to the non-is version)

The new Canon EF 70-200mm f/4L IS USM II is a great option for anyone needing the 70-200mm focal length range. This lens is great for outdoor sports, portraits and some wildlife (think of the zoo or other animal sanctuaries where you can get a little closer to the wildlife). If you don’t need f/2.8 but want image stabilization then this is the lens for you. Some photographers may find the EF 70-300mm f/4-5.6L IS USM to be better for them due to the extra 100mm at the long end, but they do give up a stop of aperture.

based on 97 user reviews online.